Leave a comment Posted by MRED Communications on December 18, 2013

The Fed today announced they would be pulling back some of their stimulus package which has helped the housing market by keeping long term mortgage rates at historic lows for the last few years. This should come as no surprise to KCM Members as we have been warning of this likelihood over the last several months.

We even went against the belief of the vast majority of economists who thought the Fed would wait until next year. In this month’s edition of KCM, we quoted Bill McBride of Calculated Risk:

“Although the consensus is the Fed will wait until 2014 to start to taper asset purchases, December is still possible.”

We also gave you the following grouping of slides to help you explain the ramifications of the Fed’s decision. 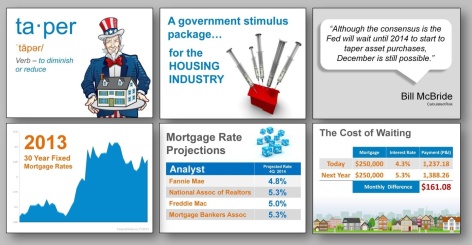 If you shared this information with your clients earlier this month (prior to the announcement), you solidified your position as THE MARKET EXPERT.

If not, get this information out ASAP!!

What it Means to the Consumer

In an article in MarketWatch today, Lawrence Yun, the Chief Economist at NAR, explained that sellers looking to move-up (to a better school district or larger home) “need to realize that it could be more challenging a year from now.” Yun stated the average 30-year mortgage rate currently hovers at 4.3%, but that could rise to 5% or 5.5% next year.

What it Does NOT Mean to the Housing Market

Some reports will now claim that housing prices will have to drop as interest rates begin to rise. There is no historical evidence of this. Below is a chart showing the last four instances of mortgage rates rising dramatically and what happened to home values at the time. 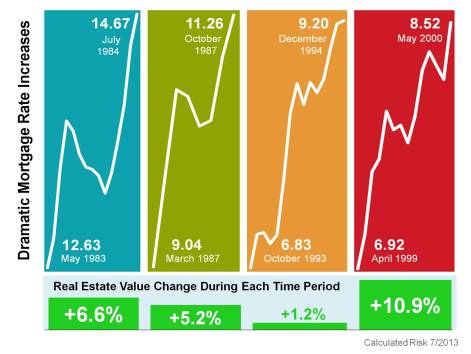 If a client is either a first time buyer or a move-up buyer, they should make the move earlier in 2014 instead of later as mortgage rates will probably increase as the year goes on.